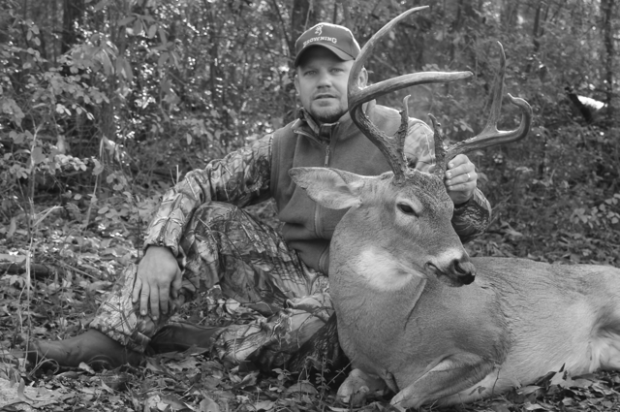 Everything was lining up for Tuesday to be a perfect morning for deer hunting.  The weekend had been unseasonably warm with lows only in the mid 50′s…followed by a Monday that had strong winds and rain all day.  The rutting activity seemed to have slowed with the warming temperatures and the strong winds limited deer movement.  I suspected the deer would be ready to move and feed Tuesday morning, as soon as the winds died down.

Additionally, the weatherman was calling for a cold front to arrive Monday night causing the low temperature for Tuesday morning to drop to 28 degrees…a 27 degree drop in low temperatures in a 24 hr period.  The rut, which had lulled for a couple of days, would surely be flaring back-up!  I decided to hunt a stand that overlooks a large hayfield surrounded by a number of cedar thickets.  Historically, this has been a great stand to cover a lot of ground looking for rutting activity.  Being black powder season, I was able to see much further than I could shoot.

As soon as shooting light arrived, a number of deer could be seen in the field which had been covered by a shiny hard frost.  As visibility increased, I could make out a small eight point buck in the field chasing several does.  It was not long before deer began pouring into the field from different directions.  It was hard to keep track of the number deer as they came and went, but I could track at least 5 different bucks and would guess somewhere between 20 – 25 does.

Having paid my dues and spent many unproductive hours in the deer stand, it is an amazing feeling to be in the right spot at the right time!  It was thrilling to watch all the deer activity – to see a couple young bucks sparing, bucks chasing does, to hear grunting, to see bucks working scrapes and rubbing trees.  It was the most deer activity I had seen all year.

Enjoying the morning and having the opportunity to be in the middle of all this deer activity, I noticed a lone doe enter the field about 300 yards away.  My experience told me she was a “hot doe” – she had that skittish appearance and the tell-tale sign of continuing to look behind her.

I focused completely on her to see if the buck in tow was one I had already seen that morning or hopefully a new shooter buck.  Within a minute a large bodied, tall racked buck raced into the field.  My first thought – “Big Buck!” and in a moment I went from enjoying the morning to all business.  As I studied the buck, I could see he was a six pointer…. but a very large six pointer.  I could easily tell by his body size and conformation that he was a mature deer, and that he had plenty of height, width and mass… a great buck.

As the buck trailed the doe up the edge of the field,  I ranged a landmark to find 150 yards and determined that as soon as he reached the mark I would take the shot.  Just shy of the mark, the doe darted back into the tree line with the buck hot on her heels.

About the time I relaxed my shooting position and began to think that it wasn’t meant to be, the doe exploded back into the field running straight in my direction with the buck less than 100 yards behind her.  As the doe passed my stand, I prepared for the shot and mouth grunted as loud as I could to break the buck’s concentration.  He stopped broadside at 50 yards, offering a perfect shot… it was the perfect morning to be in the deer stand!

by Peter, pictures by Peter and Sunshine 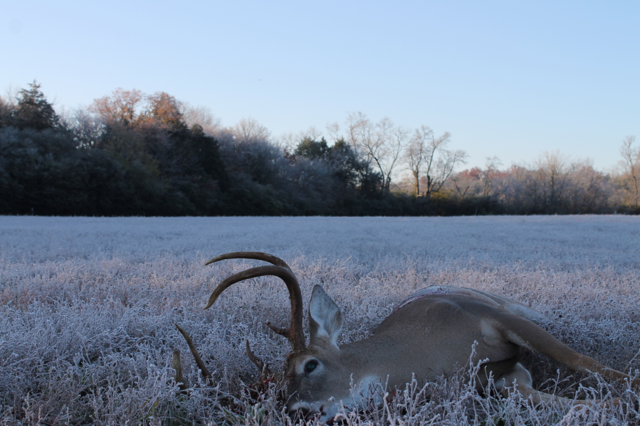