Posted November 2, 2012 by Our Southern Roots 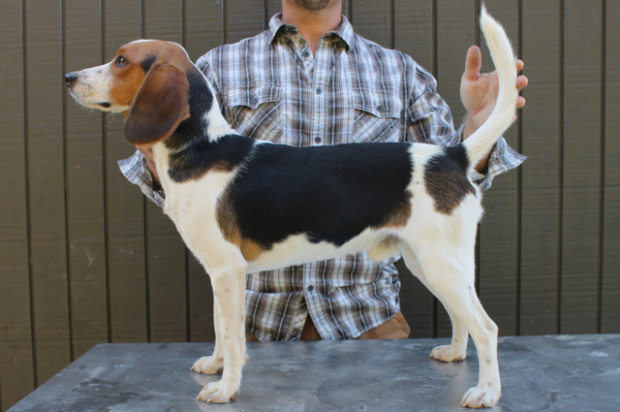 Whitey is perhaps the best one-year old hound we’ve had to date.  His AKC registered name is Puckett Creek’s Timber, but the kids have called him “Whitey” since he was whelped, fall of 2011.  We own both his sire and dam and regard them as the best all around gun dogs in the kennel.

Whitey is a pleasure in the kennel and demonstrates a strong desire to work hard in the field.  He excels in the areas of hunt and track running.   Even at a young age, this hound is getting his share of strikes and checks when running with older more seasoned dogs.

Whitey, started scent trailing after only three sight chases.  At a year old, he is now able to jump his own rabbit and circle it with ease while running solo.  I have kept in touch with the owners of his litter mates and all are progressing nicely.  This is a breeding we will repeat!

The true test for Whitey will be the upcoming gun season.  No hound can be fully evaluated until he has joined the pack in the field under the gun.  We look forward to shooting the first rabbits in front of Whitey this winter!

by Peter, picture by Sunshine